Pollution monitoring on the cheap?

This work is being carried out using a Faculty of Social Sciences grant at the University of Kent, in the Centre for Health Services Studies (CHSS), led by Prof. Stephen Peckham, along with Canterbury Clean Air group. The project goal is to create a new particulate dataset for Canterbury and analyse any correlations with health data.

So even if breathing in pollution was completely healthy, there would still be compelling reasons to switch to alternatives that either stop producing it or produce less of it.

What do you mean by pollution?

Whilst the term "pollution" is emotive and imprecise, it is also vernacularly well understood to be something that needs to be avoided, hence the reason for using it. However, when it comes to actually monitoring pollution, we need to be more specific.

What we are interested in monitoring in Canterbury is particulates. Whilst "particulates" is a generic term for very small particles, there are two size categories that are most commonly monitored: PM2.5 and PM10. The actual definitions are quite nuanced and require discussion, but for the point of this article we will assume the general definitions below:

There are two principle manners in which particulates are monitored:

Separation in case of the first class of devices is often acheived by use of an impactor separator. This device works by accelerating polluted air to a known velocity and then passing it around a 90° bend. Particulates that have too much momentum, can't make it around the bend and "impact" into the wall of the bend. Thus the impactor separates out particles by size, assuming a certain mean density. This would typically be combined with a filter which captures the particles and which is periodically weighed to yield a measurement in micrograms per meter cubed of air.

There are few different ways to weight separated particles, the most common are:

In the case of count and classify systems, they are almost exclusively optical and work on the principle of particles reflecting laser light onto a photodiode. This is described in more detail below.

Design of a portable PM 2.5 and PM 10 measurement system

The design was subject to several constraints:

For monitoring of particulates we used the Dylos DC1700 portable optical particle counter. 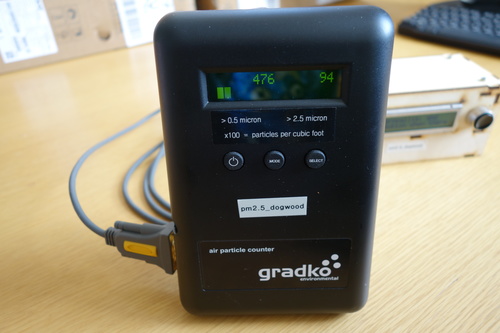 There is much more to say about the suitability of this particle monitor, but in summary this was the only "cheap" particulate monitor that appeared in peer reviewed literature with direct in-situ comparison against a real DEFRA site [2].

Cheap in this context is relative: the type of equipment DEFRA uses comes with a £5K - £15K pricetag whereas the DC1700 costs £522.00 including VAT in the UK, and something like $425.00 in the USA. This is still far too expensive for generalised mass monitoring.

The Hybrid Ecologies Lab at UC Berkeley in the USA is making fantastic progress in reducing the cost of particulate sensors, having created a matchbox-sized personal PM10 monitor for only $75 as well as creating their own monodisperse particle generator and calibration chamber.

We didn't have the budget to build this both in terms of time and initial equipment investment, and it didn't exist when we created the project. In my opinion it is however the way to go in the future, but the present time however, the DC1700 is still the cheapest equivalence product on the market.

The DC1700 is an optical particle counter. The operating principle is actually quite simple: 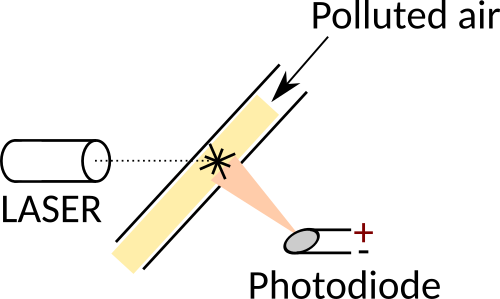 Since the amount of light a particle reflects is proportional to its size, the response of the photodiode indicates the size of the particle involved. By continously sampling the (amplified) photodiode output, the number and sizes of particles can be counted.

Note that in practice various assumptions dictate the accuracy of the method: such as the reflective index of the particles for the wavelength of the laser and so on, but as an equivalent metric for PM2.5 and PM10 measurement, optical particle counters work very well.

The DC1700 in particular is a bit outdated with regards to its design:

Despite these shortcomings it is the best unit available at present for the cost.

The DC1700 is actually not useful on it's own as a hassle-free data collection unit since all it does is log data to an internal memory, and spit out average readings once per minute to the RS232 port.

Given that we purchased five units, and have tens of volunteers using them, it would be an enormous timesink to manually download the data at the end of every day. Furthermore, the data is only timestampted by the DC1700, so we would have to manually label the data with each location monitored, based on a log taken by the volunteer.

Whenever you introduce complexity, it reduces the chance of actually getting anyone to help, and reduces the availability of the data.

I wanted something which could meet the following criteria:

What follows is a description of the design and how it meets these criteria. The design will make more sense if you understand how the volunteers use it, since the design and metholology were systems-engineered simultaneously.

Each of the five collection units comes as a pair of one DC1700 and one data collection box: 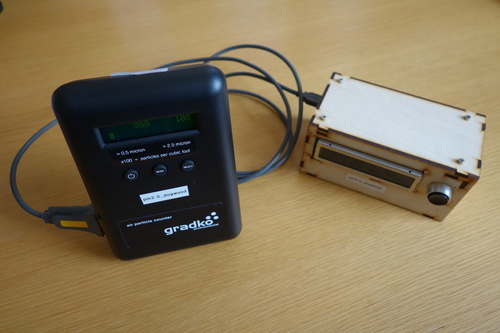 The operational model for collection proceeds as follows:

Now we will focus on the design of specific elements of the collection box.

The front of the collection box consists of a 24x2 backlit LCD display whose display driver is Hitachi HD44780 compatible. The HD44780 is incredibly easy to drive and libraries for doing so abound. This particular screen isn't fantastic in terms of visual clarity or power consumption, but it did have one defining characteristic: cost - the makerspace had a box of these going for free. 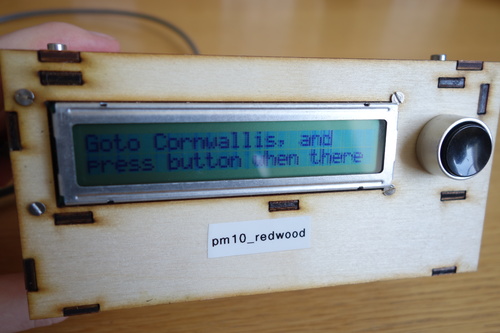 The display is big enough to show simple instructions such as that seen in the image "Goto Cornwallis, and press button when there", which is all it needs to do.

In addition to the display is a single large tactile button, ingressed into a circular surround to reduce accidental pressing. All of the box operations must therefore rely on being able to use a single button, which practically means that actions are reduced to three possible choices:

Despite these limitations, the single button is sufficient to provide all operations the box needs.

The DC1700 is connected to the collection box via any of the USB connections exposed on the side of the box: 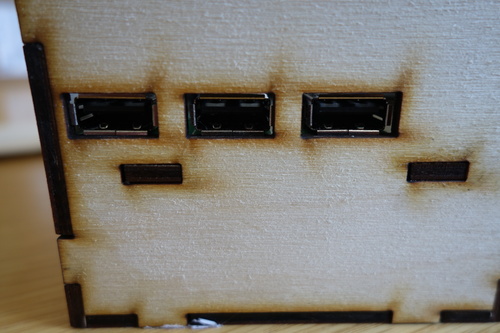 On the back of the box is simple inline switch to turn it on and off and a charging port to charge it: 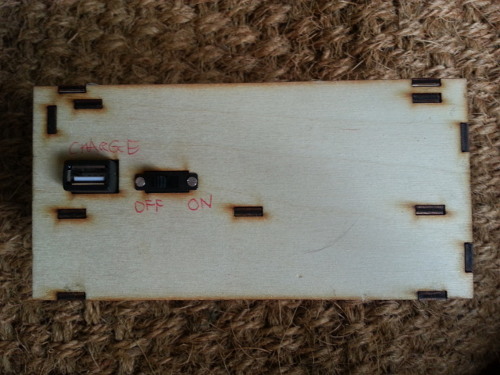 Please excuse the crudeness of the labelling; the other units have printed labels but this one was handed to someone to use in a rush so I had to quickly scribble the labels. In retrospect, I could have laser-scribed the labels directly into the plywood box.

The hardware is pretty simple and consists of:

These are all shoved inside the plywood box and glued in place with hot-glue, or in the screens case; bolted to the box. 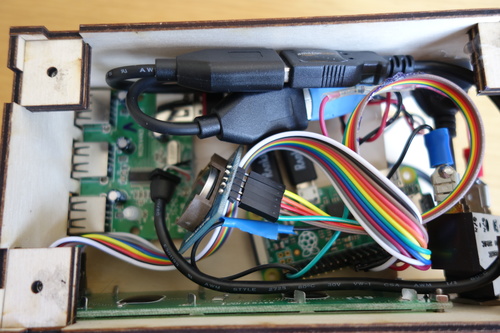 The raspberry pi zero was chosen because it provides the most bang per buck of any "embedded" processor on the market. At £4.00 per unit, there really isn't anything that can compete for rapid prototyping. The only other computer I seriously considered was the ESP8266 wifi module, with a pricetag of £3.43 per unit. This would have mitigated the need for a separate wifi dongle and microSD card, but the cost of the additional power and connection circuitry would probably have eclipsed the cost of these anyway, not to mention the added hassle. The raspberry pi zero was the best choice for this project because:

Remember, one goal here is cheapest cost. Whilst I am confident I could make a smaller and cheaper bespoke unit, the design time and assembly time would increase enormously. We are not manufacturing a product for mass production here, but rather a few units for a data-collection project on a very tight budget.

In order to be able to maintain time through resets, the pi is connected to an DS1307Z RTC: 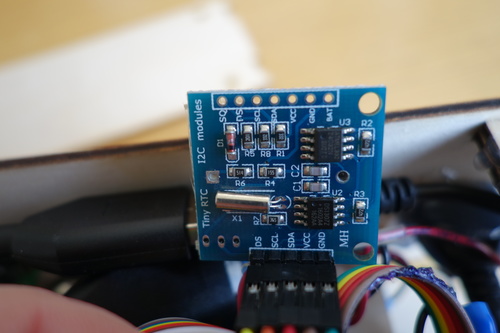 This has the advantage that it is natively supported in Linux on the raspberry pi, and so the system time can be set from it on boot. We need real-time that persists through power-cycles is because the DC1700 interface is garbage and outputs un-timestamped data at one-minute intervals. We need to label each datapoint with time ourselves.

The battery for the collection box is an Anker Astro E1: 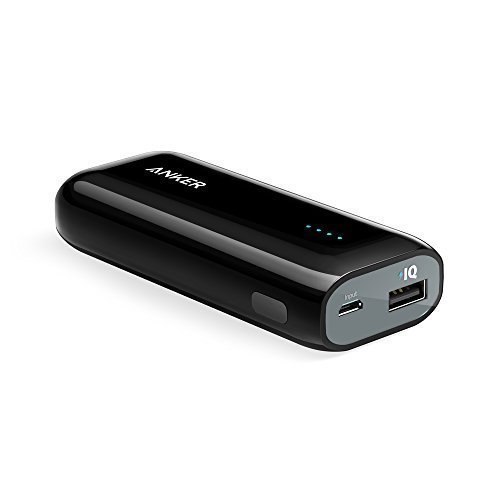 This has a 5200mAh capacity. Annoyingly, it cannot symultaneously supply power and charge, which makes it much more of a hassle to upload data from the unit when it's back at the exchange point at the end of the day. If it had been the case that the battery could charge whilst the unit was on, it could upload its data whilst charging. Instead the unit has to be left on until it uploads its data, and then switched off for charging. This is something I explicitly had attempted to avoid, and based my assumption on a 10000mAh Anker charger which we had lying around in the lab and which did allow symultaneous charging and use. I won't make that mistake again.

Since the box with all peripherals draws no more than 300mAh even when uploading data, the box will last for at least 16 hours. This gives plenty of scope for additional peripherals. The battery compartment is big enough to hold a bigger battery if necessary: 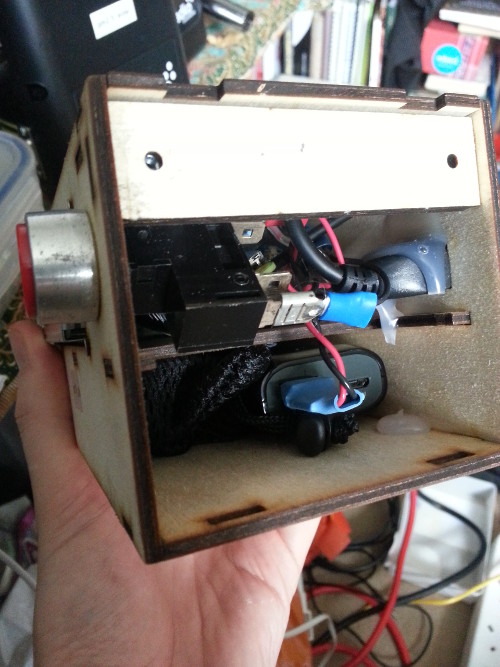 However, the main limitation is the battery of the DC1700, which only lasts 5 hours.

In the above picture you can see the button also, this is wired from the pi's 5V supply with an inline 10k resistor to a GPIO pin using the interal pull-down resistor for the input. The button is a simple normally-open switch.

The enclosure is made of laser-cut 3mm plywood that has been glued together with wood glue.

Because the hardware uses a raspberry pi zero, it is possible to write control software that is much more sophisticated than the equivalent embedded software for a given amount of work input, because of the plethora of existing libraries and OS primitives available. For example, we can take advantage of the journaling capabilities of ext3 to provide some assurance against data corruption, which would require a bespoke implementation in the embedded world, or in the best case messing around porting some existing library.

The image below shows a diagram of the software components:

By decoupling each of the processes, it makes it easy to configure the control flow, collection methodology, sending transport independently.